The oboe we use in today’s modern orchestras and ensembles is the result of a 350 year development of the more primitive Renaissance shawm,

Shawms, (Double reed instruments) were brought to Europe during the Crusades of the middle ages. They were played alongside trumpets, and drums by the Saracen armies as they marched into battle against the Crusaders in sound and volume not unlike Scottish bagpipe bands!

Shawms are still used throughout the middle and Far East little if at all altered from these times. They come in many differing sizes and volumes. Today, we mainly associate them with outdoor activity such as supplying music for festive occasions including weddings etc., but many were designed for more intimate settings including music for theatres and temples.

When the western shawm was developed, it was a more controlled and refined version of the instruments seen by the Crusaders. They could be used indoors or out depending on the circumstances and by the mid 13th century the shawm (French – chalmei, from the Latin ‘calmus’ meaning reed) was widespread throughout Europe. A consort of differing sizes was developed enabling the Western shawm to be played in family groups or alongside other instruments.

During the 17th century and particularly under the influence of Lully, the chief composer/conductor to Louis XIVth (the Sun King) at the Court of Versailles, the orchestra was developed and refined along with many of its instruments.

The shawm was considered too inflexible in volume and technique and so a group of player/makers at the court including the Philidor and Hotteterre families, together developed several new instruments including the flute, oboe and bassoon.

By the 1660’s the hautbois (‘high wood’wind instrument as opposed to the bassoon ‘bass sound’) as the instrument was called, was in its prototype form and by 1700 had reached its final Baroque form. It had considerably improved performance over the shawm and was praised for its ‘inimitable charming sweetness – (as) Majestical and Stately, and not much inferiour to the Trumpet – (and) with a good reed ….as easie and soft as the flute’ .

It proved extremely popular and spread rapidly throughout Europe as an outdoor military instrument played in oboe-bands and as an orchestral and chamber instrument.

Although France is credited with designing the oboe and teaching the first generation of players, it was the Italians who became the most competent and virtuosic technicians of the instrument. Many of their leading players came to England where they were highly praised by the music establishment. They went on to re-design the oboe into the ‘classical oboe’ (a much finer and more delicate sounding instrument as used by Haydn and Mozart) and from this point onwards it was the Germans who began to dominate the world of oboe playing.

In the 19th century the French firm, Triebert took the classical oboe and further developed it. They made it even narrower and added more keys to its body. By 1900 they had come up with a key-system that has not been superseded even today and may never be.

These instruments however, are far removed in terms of playing style, sound and appearance from their Baroque ancestors, and in order to capture and experience something of the past, we, like many others, have taken on the task of learning and performing on exact copies of Baroque instruments in order to capture some of the excitement and flavour of those times. 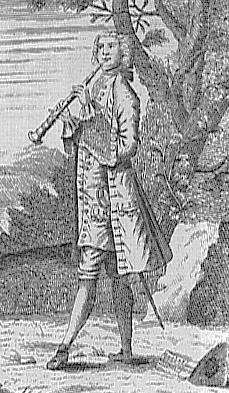